No actual storyline has ever been revealed for this movie, though the fan-created DVD case makes up a good one... but kills off Sidney!

It has been fifteen years since the last killing spree orchestrated by the infamous Ghostface. With Sidney Prescott now dead after her final encounter with the killer in Hollywood, it seems everything is back to normal in the small California town of Woodsboro. But when a freak lightning storm occurs in the town where it all began, the buried remains of Ghostface come back to life to instill fear in the hearts of a new batch of victims. Now it's up to Ashley Prescott, Sidney's long-lost daughter, to put an end to the madness once and for all!

Based on the book by Woodsboro survivor Gale Weathers-Riley and featuring a brand-new cast of fresh faces, Stab 4: Knife of Doom gives new life to the franchise... before Ghostface takes it away!

FUN FACT #1 This film was based on the Gale Weather's book "Knife of Doom."

FUN FACT #2 The subtitle "Knife of Doom" was never shown in the Scream movies on posters, DVD cases or on screen. It was added on the fan created DVD covers. So, it may not actually be part of the title of the film. 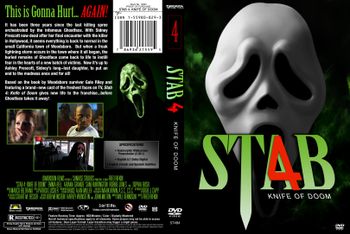 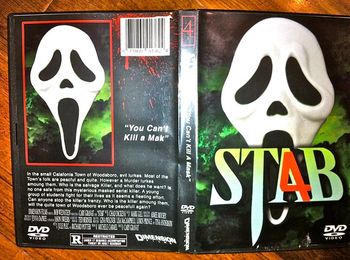