The History of the Stab Film Franchise

The history of the Stab film franchise is a bloody mess! From murdered casts, to prematurely shut-down productions, leading to multiple versions of films, the Stab franchise has never shied away from drama but has always shown persistence! 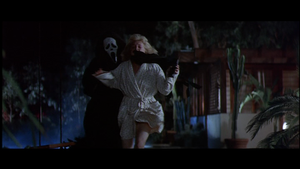 It is most important to remember where these films come from, they are simply a plot device used in the “Scream” films. Stab is not an actual film franchise, well, it wasn’t. That is until StabMovies.com got involved! The Stab films first premiered in “Scream 2” where we had 2 short glimpses at re-made versions of scenes from the first Scream and we learned that the movie was based on Gale Weather’s book “The Woodsboro Murders.” (It is also commonly forgotten that Gale wrote a book about Cotton and Sidney and her mother's murder in the first Scream, no images have ever surfaced of it.)

In “Scream 3” we are now on the set of in-production “Stab 3: Return to Woodsboro.” This version of Stab 3 marks the first time the storyline of the Stab film departs from the stories of the Scream films. In other words, Return to Woodsboro is not based on “actual” events, though does continue the story line from the prior 2 films (and one can assume, the storyline of Gale Weathers’ novels). Which brings us to our next point… we skipped a movie!

Stab 2, though never actually shown in a Scream film, also makes its debut in the form of a movie poster in the office and 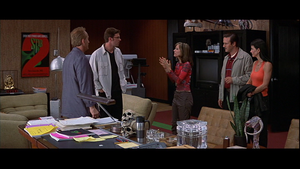 house of faux producer John Milton in Scream 3. The bonus features on the DVD of Scream 3 would finally offer us a glimpse at Stab 2, with a trailer made (cheaply) to fill the gap between the films. Most of it was well done, mixing footage from Scream 2 with newly shot footage, but a few minor mistakes were made… like the lack of Tori Spelling as Sidney and Parker Posey as Jennifer Jolie as Gale Weathers. 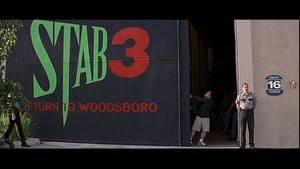 Which brings us back to Stab 3. In Scream 3, the entire cast of "Return to Woodsboro" is murdered… shutting down production on that version but eventually inspiring a new version “Stab 3: Hollywood Horror,” which was based on the “actual” events of Scream 3. (Exhausting, right?!)

When Scream 4 premiered, in real life, 10 years later, it was revealed that the Gale Weathers character had written seven books and seven Stab movies had now been produced in total. This is also around the same time that StabMovies.com was founded. In fact, writer and director Joshua Patrick Dudley attended the premiere of Scream 4 in Hollywood, representing StabMovies.com.

StabMovies.com changed the title of their Stab 4 from “Knife of Doom” to "Fresh Blood" and started over with a whole slew of new characters. The storyline was basically a parody of the Scream movies with new characters, though clearly based on the main characters from the previous Stab films.

StabMovies.com dropped the “Clock of Doom” subtitle and time-travel filled story-line of "Stab 5" and instead brought the audience to a new reality, where StabMovies.com was the producer of the Stab Franchise and someone was killing off the cast of Stab 4: Fresh Blood... super meta. It is also important to note that the real reason our Stab 5 does not feature time-travel is because the script was written before the release of Scream 4.

“Stab 6: Ghostface Returns” is the title of both versions of Stab 6 and a small part of the Scream version of Stab 6 can be seen in Scream 4. StabMovies.com’s Stab 6 is a direct sequel to their Stab 5 and puts the cast on the set of an in-production, Stab-themed reality competition show.

In 2020, StabMovies.com released a Stab reboot entitled... "Stab." Featuring many of it's former stars and some new faces, the story of the movie follows a new lead girl named Claire Matthews and her friends. This film also marks the introduction of a new killer, The Ghost. With the same costume, but a new mask, the Ghost terrorizes Claire and her friends, picking them off one by one.

In the fifth Scream, we learn that in 2021, Stab 8 was released inside the Scream-verse but was simply titled "Stab." It was not well received by fans (in the Scream-verse) and followed a storyline that had nothing to do with the previous films.

Stab 2, a sequel to the reboot, was released in 2022. Much like Stab 5, Stab 2 brings back the cast from the previous movie and enters reality, where the Stab reboot was just a movie, and someone is trying to kill the cast.

StabMovies.com plans to release Stab 3 in 2023, which brings the total of all the Stab films (including alternate versions) to 18! 17 if you don't count the unfinished Stab 3: Return to Woodsboro, and technically 15 if you don't count our two failed versions of Stab 7. If they were all real movies, it would be the biggest horror franchise in existence!